Texas DWI Lawyer Deandra Grant took a test for a certification/accreditation in DUI/DWI Defense and failed. Looking to blame others, then the self-proclaimed ‘Texas DWI Gal‘  filed a lawsuit claiming that her failure was due to the fact that she was a woman. Her lawsuit was thrown out of court. She spent two-and-a-half years litigating the case all the way to the Washington Supreme Court and according to the courts she couldn’t even get past the first stage – knowing where to file a lawsuit and how to state a cause of action. Her multiple appeals were exhausted this past month. Her lawyer Okorie Okorocha received his own sanctions of $3000 for his role in this lawsuit, and that appeal also failed at every stage all the way to the United States Circuit Court of Appeals. The National College for DUI Defense called both of these lawsuits ‘frivolous’ from their inception.

According to a statement issued by the National College regarding Deandra Grant:

Beginning in March of 2012, NCDD has been involved in litigation brought against the College by Deandra Grant – where she alleged that she passed the Board Certification examination but was denied Board Certification solely because she was female. The initiation of this litigation was revealed and discussed on the College list-server at that time. Until now, as was prudent given the pending litigation, there has been no public statement by the College. The litigation has now concluded and it is now appropriate for the College to provide its members and others a complete and truthful recapitulation of the events.

NCDD prevailed in all respects. All actions against the College were either dismissed in the face of threatened sanctions or were dismissed by the courts with prejudice. Grant’s lawyer, Okorie Okorocha was sanctioned $3000 in federal court. All appeals were decided in favor of the College. There were no settlements or settlement negotiations.

What follows is a summary of the litigation so that all interested persons may judge the facts, circumstances, and motivations for themselves. NCDD will shortly post on its web site a detailed version of the events with copies of all relevant documents.

In January 2012, Deandra Grant took the NCDD Board Certification examination. She did not pass the examination. In mid-March 2012, after being orally advised of the results, she sent a letter to NCDD demanding to know why she did not pass. On March 16, 2012, she – along with every other person who had taken the January 2012 examination – was sent a letter advising of their specific results. As had been the practice for several years prior to the 2012 examination, she was advised that she could, if she chose to do so, retake only the brief and oral argument portion within the following few months, rather than waiting for the next administration of the full test in January 2013.

On March 26, 2012, NCDD received a demand letter from Okorie Okorocha, as the lawyer for Grant. It sought review of the test and her answers by three people chosen by Grant. It concluded that NCDD was “further on notice to preserve all evidence pertaining to Ms. Grant’s examination and certification materials for the lawsuit that will likely be filed and full discovery conducted.” (Emphasis in original). On April 7, 2012, Okorocha sent NCDD an email seeking to “know the results of the review of Ms. Grant’s examination by 4/11/12 or the lawsuit will be filed that day or the day after.” On April 11, 2012, NCDD advised Okorocha by email that Grant needed to let the College know whether she desired to retake the brief and oral argument portion in May or June of 2012. On the same day, Okorocha responded “will you accept service by mail” and “The lawsuit will be filed tomorrow morning.”

On April 13, 2012, Grant filed suit against NCDD in federal court in Los Angeles alleging, inter alia, that, even though she passed the examination, she had been denied Board Certification solely because she was female. On April 20, 2012, she filed her first amended complaint, which added her lawyer, Okorie Okorocha, as a party plaintiff, alleging that the improper granting of Board Certification to other lawyers harmed his DUI practice. On June 13, 2012, Grant, after being threatened with a motion for sanctions, denied the College the opportunity to litigate the lack of merit in her claims by voluntarily dismissing her portion of the California federal lawsuit. NCDD filed its 12(b)(6) motion to dismiss, its answer, and its motion for sanctions. On August 1, 2012, Okorocha voluntarily dismissed his portion of the federal lawsuit, even though he had, ten days earlier, filed a pleading opposing NCDD’s motion to dismiss. Despite his voluntary dismissal, the court, under Rule 11 and after a hearing, sanctioned him $3000 for adding himself as party plaintiff for the purpose of doing so solely to improperly seek to establish venue in California. Okorocha appealed the sanction order and, on June 18, 2014, the Ninth Circuit affirmed the sanction order in an unpublished opinion.

After voluntarily dismissing her federal lawsuit, Grant next filed suit against NCDD in state court in Washington. NCDD moved for dismissal for, among other reasons, failing to state a cause of action and for forum non conveniens. After a hearing, the trial court granted NCDD’s motion and dismissed her lawsuit with prejudice — both for failing to state a cause of action and on forum non conveniens grounds. Grant appealed to the Washington Court of Appeals, which affirmed in a unanimous unpublished opinion. On appeal, Grant failed to challenge the trial court’s decision to dismiss the action for failure to state a cause of action. NCDD argued — and the Court of Appeals agreed – that Grant’s failure to challenge the basis for the trial court’s dismissal required affirming the dismissal. The court of appeals also held that Grant had waived her challenge to the forum non conveniens ruling. Grant sought review from the Washington Supreme Court and on June 4, 2014, the Washington Supreme Court denied review.

The following links offer some examples of the many public statements issued by Grant’s attorney during this litigation:

The NCDD Board of Regents did not publicly respond to these press releases for two reasons. First, we are a non-profit organization dedicated to helping educate our members and advancing the cause of justice. Engaging in public commentary over frivolous lawsuits does not further these objectives. Secondly, the NCDD was represented by competent legal counsel and we remained confident these lawsuits would ultimately be dismissed.

The NCDD Board of Regents is pleased to have the distraction and expense of these lawsuits behind us. We will be announcing new and innovative educational opportunities for our members in the near future, and we will continue to administer our Board Certification program to the same high standards approved by the ABA.

NCDD does not tolerate any form of discrimination, has never done so, and will not do so in the future. This past spring the American Bar Association, with full knowledge of the lawsuit pending at the time, re- accredited the NCDD to certify lawyers in the specialty area of DUI Defense Law. We are extremely proud of this accomplishment, and will continue to administer the test using the same high standards established by the founding members of this organization.

The Bartlett DUI Police have announced that they will be spending extra time before and after the Fourth of July 2014 to arrest people for DUI. They will be paid extra bounty money from the Illinois Department of Transportation based on whether they make enough arrests and issue enough tickets to satisfy the quota requirements of the federal grant.

Whether such a procedure of filling an arrest or ticket quota is legal under the new Illinois traffic laws might become an issue.

Since the police will get paid a bonus if they meet their quota for DUI arrests, you can expect more to happen than would be normal.

If arrested for DUI Cannabis and given a sobriety test, you might be able to pass even if you are high as a kite, according to an article in the New York Times. The article cites to several studies that support that alcohol-based field sobriety tests are not valid for proving someone is under the influence of cannabis. Her are some excerpts:

If you are pulled over on suspicion of drunken driving, the police officer is likely to ask you to complete three tasks: Follow a pen with your eyes while the officer moves it back and forth; get out of the car and walk nine steps, heel to toe, turn on one foot and go back; and stand on one leg for 30 seconds.

“In a 2012 study published in the journal Psychopharmacology, only 30 percent of people under the influence of THC, the active ingredient in marijuana, failed the field test. And its ability to identify a stoned driver seems to depend heavily on whether the driver is accustomed to being stoned.

“A 21-year-old on his first bender and a hardened alcoholic will both wobble on one foot. But the same is not necessarily true of a driver who just smoked his first joint and the stoner who is high five days a week. In another study, 50 percent of the less frequent smokers failed the field test. 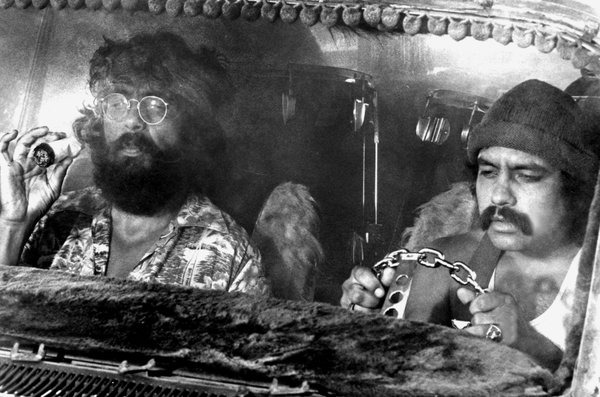 “A 2007 study found that 12 percent of the drivers randomly stopped on American highways on Friday and Saturday nights had been drinking. (In return for taking part in the study, intoxicated drivers were told they would not be arrested, just taken home.)

Six percent of the drivers tested positive for marijuana — a number that is likely to go up with increased availability. Some experts and officials are concerned that the campaign against drunken driving has not gotten through to marijuana smokers.

“Still, it is clear that marijuana use causes deficits that affect driving ability, Dr. Huestis said. She noted that several researchers, working independently of one another, have come up with the same estimate: a twofold increase in the risk of an accident if there is any measurable amount of THC in the bloodstream.

“There is a lot of debate about how best to prove that drivers under the influence of THC are too intoxicated to drive. Blood-alcohol content can be reliably tested on the side of the road with a Breathalyzer, and ample data link rising levels of blood alcohol to decreases in driving skills. The same is not true for marijuana.

“THC levels must be measured from blood or urine samples, which are typically taken hours after an arrest. Urine tests, which look for a metabolite of THC rather than the drug itself, return a positive result days or weeks after someone has actually smoked. Yet most states have laws that equate any detectable level of THC metabolite in urine with detectable levels of actual THC in blood, and criminalize both. Only six states have set legal limits for THC concentration in the blood. In Colorado and Washington, where recreational use has been legalized, that limit is five nanograms per milliliter of blood, or five parts per billion.

Illinois will need to prepare for this challenge. Present law on the subject states that field sobriety tests ARE proof of impairment from alcohol; a declaration made by uninformed legislators who were misled by the lobbyist who drafted the bill. No doubt, legal challenges will arise from this law, but we are likley stuck with it because the lobbying industry was more concerned about their own money fortunes than the rights of the motoring public.